The New Jersey Department of Environmental Protection announced that it has developed a color-coded health alert index to provide the public with strong and clear guidance on suitable recreational activities in freshwater lakes and other water bodies impacted by harmful algal blooms, also known as HABs. The DEP is committed to working with local officials to implement the index as soon as possible.

The new index will make it clearer to the public that, in some instances, boating and related activities may still be permissible when lower levels of harmful algal blooms are detected.

“DEP scientists carefully reviewed data collected during harmful algal blooms that occurred in New Jersey over the last three years to develop a tiered warning system that will enable lake communities, residents and visitors to make more individualized decisions about what risks they are willing to take and what activities they feel comfortable engaging in at the various levels of HABs,” Commissioner McCabe said. “We can’t predict with certainty when harmful algal blooms will occur, but with this enhanced communication and color-coded alert index, we hope that the appropriate responses to harmful algal blooms will become much more predictable and targeted, which should provide much more certainty as well as flexibility for residents and businesses to make sensible decisions. ”

New Jersey’s Harmful Algal Bloom Strategy and Alert Index
The index is part of a broader response initiative directed by Governor Murphy following nearly 40 harmful algal blooms that impacted New Jersey last year. This initiative includes more than $13 million in state funding for local projects to mitigate and respond to harmful algal blooms as well as development of tools to enhance monitoring and communications of health information to the public.

Governor Murphy met with impacted communities in November 2019 and the DEP held public meetings as part of its efforts to map out a better path moving forward. The DEP also held two summits earlier this year also as part of Governor Murphy’s HAB initiative. 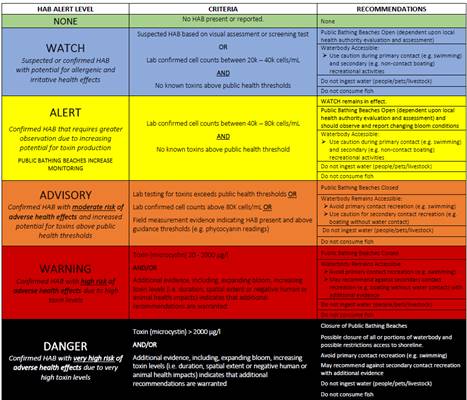 In response, the DEP has developed a color-coded alert index (see accompanying chart) with signage that provides much greater precision on recreational use recommendations for impacted water bodies based on levels of cyanobacteria and/or cyanotoxins present. The index has multiple alert categories, each providing recommendations of activities that should not be pursued based on water monitoring results.

A Watch will be posted when cell counts exceed 20,000 cells to notify the public of potential less serious health effects and allow them to make informed decisions about their recreational activities. The Alert level is for public bathing beaches only and is indicated when a HAB has been confirmed, with cell counts between 40,000 and 80,000 and no known toxins above the public health threshold. At the Alert level, the index suggest that beaches increase monitoring for future toxin production.

The Warning and Danger tiers are designed to communicate HABs that are producing very high levels of toxins which justify additional caution. New Jersey has experienced approximately a dozen HAB events over the last 3 years that would trigger a Warning; monitoring has never indicated a HAB event which produced toxins that would trigger a Danger alert level.

The DEP’s Harmful Algal Bloom website will be updated to include this new index and accompanying signage, relevant monitoring data and other information for each of the impacted bodies of water, as well as an updated HAB Monitoring and Response Strategy.

About Harmful Algal Blooms
A growing global problem, harmful algal blooms are not caused by true algae but rather by cyanobacteria that in many ways resemble and behave like algae. These cyanobacteria naturally occur in fresh water and can proliferate to unhealthful levels in sunlight and hot weather, forming dense mats resembling pea soup or spilled paint.

Exposure to cyanobacteria cells can cause a range of mild to moderate health effects, including rashes, allergy-like reactions, flu-like symptoms, gastroenteritis, respiratory irritation and eye irritation. Incidental ingestion of water containing the toxins these bacteria can produce, known as cyanotoxins, can result in more serious health effects such as liver toxicity and neurological effects. Children and pets are more vulnerable because they ingest more water in relation to their size.

The presence of the cells themselves can produce health effects but the toxins that are produced during harmful algal blooms present the most serious health concerns. Based on data collected over the past three years, in particular last year, DEP scientists determined that harmful algal blooms become statistically more likely to produce toxins when cell counts exceed 80,000 per milliliter. Consequently, the DEP has developed this cell count level as the benchmark for posting recreational alerts where all primary recreation including swimming is not recommended and local health authorities close beaches.

Consequently, the index provides a more refined guidance for recreational activities. For example, swimming, water skiing, paddle boarding and kayaking are not recommended during a bloom due to the greater probability of ingestion. Secondary recreational activities such as boating, canoeing and fishing carry less levels of risk because the potential of ingestion or immersion in water is less likely to occur.  At no time is it recommended to eat fish caught in a waterbody during a harmful algal bloom or drink water from it.

Harmful algal blooms can vary in severity from lake to lake and even within individual lakes so alert levels may vary from location to location, depending on conditions, particularly in large lakes such as Lake Hopatcong, Greenwood Lake and Spruce Run Reservoir in northern New Jersey.

Blooms can be most pronounced in areas where water is stagnant or slow-moving. Nutrients from fertilizers, improperly operating septic systems and animal wastes exacerbate these blooms. The DEP is working with communities, nonprofits and academic institutions to implement a variety of strategies to reduce the impact of these nutrients. In addition, the DEP continues to expand its use of advanced monitoring tools to improve understanding of when these blooms occur, increase or decrease in intensity, including aerial remote sensing, satellite imagery and real-time monitoring buoys.

Sign up to have The Jefferson Chronicle emails/breaking alerts and TheJeffersonChronicle.com Print Edition sent free to your inbox. Subscribe >>